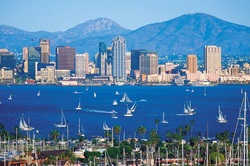 Many events involving beer happen in San Diego County and we want to be the first ones to hear about them.  We are reviewing public calendar of things to do so that we can pass this information to you the beer aficinado! 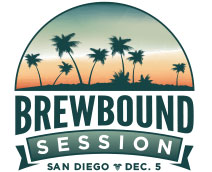 The Brewbound Session 2013 on december 5th
Shaping up to be the biggest beer gathering. The craft brewers registering for the Brewbound Session are making it clear that they are serious about developing their breweries into successful businesses. Focused on the business side of craft brewing, the event, which will be held on December 5 at the Paradise Point Resort & Spa in San Diego, Calif., offers unmatched strategic learning and networking opportunities for craft brewers and wholesalers.

November 1 & 2, 2013 @ The Port Pavilion on Broadway Pier
The San Diego Brewers Guild Festival is the OFFICIAL kickoff event for San Diego Beer Week!  Come out to the beautiful Port Pavilion on Broadway Pier in downtown San Diego to enjoy samples from 50+ craft breweries from around the county!  And to make the FIFTH ANNIVERSARY of Beer Week really special, we split this year’s festival into TWO days:VIP Brewer Takeover: Friday night (Nov. 1) from 6-9PM come rub elbows with some of San Diego’s award-winning brewers and see why San Diego beer is taking over palates everywhere.  This exclusive event will showcase San Diego’s finest, rare, and specialty beers from local breweries, including offerings brewed just for this event.  All-inclusive ticket includes unlimited beer samples offered throughout the evening coupled with unlimited food samples from local craft-beer friendly restaurants.SD Brewers Guild Festival: Saturday (Nov. 2) from 2-5PM come enjoy the Guild Festival with a commemorative tasting glass and 15 X 3 oz. beer samples.  The event showcases San Diego County’s finest craft breweries!  Food will be available for sale from local, craft-beer friendly restaurants and food trucks.  And to top it all off, musical entertainment will be provided by some of San Diego’s most talented musicians!But there’s more… To get the most out of the SD Brewers Guild Festival we are offering a Premier Access pass.   This pass will allow you to enter the festival 1 HOUR early, a commemorative tasting glass and 20 X 3 oz. beer samples (that’s 5 more tasters than our General Admission ticket!).

And if that isn’t enough… you can enjoy the festivities on BOTH Friday and Saturday at a discount!  For $100, you will get one Friday night (6-9PM) ‘VIP Brewer Takeover’ ticket and one Premier Access pass for Saturday’s Guild Festival (1-5PM). [$130 value!]

For tickets, please visit the guild's website at: http://www.sandiegobrewersguild.org/ 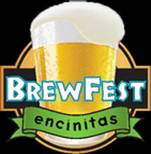 One of our favorite event where the locals meet the locals while tasting a dozen of the best brew of the area. No admission fee ! 13 breweries will showcase on this special day. Meeting at 4pm at Mira Costa College 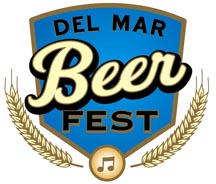 Sample over 100 different brews including more than 40 of San Diego’s finest.  Meet the beer lovers local brewers, have the opportunity to get cool merchandising items for your collection and much more.  There will be Food Trucks & Seaside Cabana  for your party to chill in style. Plus great music all day with local bands.

And you know what ? The admission is free ! 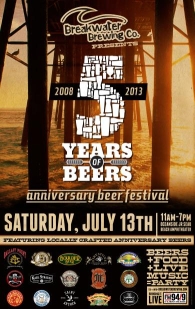 Come celebrate the 5th Anniversary of Breakwater Brewing Company with the rest of San Diego's craft beer family on July 13!

Everyone needs a break! Come ride the wave at Breakwater Brewing Co. Enjoy our SoCal Beach Style of brewing beer.

They offer their own house brews, local guest brews, different regional brews on tap and casual cuisine from mouth watering pizza to priceless paninis. Enjoy your favorite sporting events on our 4 HD TV's. They are located footsteps from the sand!

Come to Breakwater Brewing Company where you feel like a "local" no matter where you’re from!

You will have the opportunity to taste a tons of delicious beers
Do not drink and drive, Five Star Tours can be your safe ride ! quote request : info@fivestartours.com

Approx 150 local breweries and over 350 beers from around the world will be participating in this Beer Fest. The winning brewery will be announced on the last day of event. Last year, Carlsbad’s local brewery, Poor Man’s IPA beer by Pizza Port was the winner. 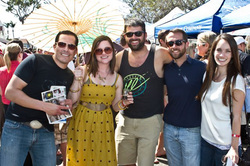 Outside, right in front of the Lafayette Hotel
at 2223 El Cajon Blvd

Check out the participating breweries by clicking here


Entry to the festival gets you unlimited tasters, plus live music on the Bar Pink Stage -- all afternoon!
Food will be available for an additional cost.
Must be 21 or older to attend this event. 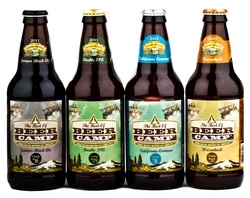 Come join BeerNerdz and Eclipse Chocolat for a unique truffle and craft beer pairing. Enjoy the amazing and creative truffles from Eclipse Chocolat as BeerNerdz pairs them with a beer that best compliments their flavor profile. San Diego breweries will be featured as well as some international favorites. There’s even going to be a beer infused truffle featuring a San Diego brewery made specially for the tasting!

Event includes 5 truffles appropriately paired with a local or international beer, a menu listing the pairings with a notes section and tips on how to taste truffles and beer.

Two seating will be offered. 6-7pm and 7:30-8:30pm. Featured truffles will be available for purchase after the tasting to replicate the event at home! 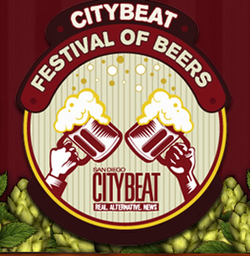 SAME LOCATION!!!
Outside, right in front of the
Lafayette Hotel at 2223
El Cajon Blvd

Entry to the festival gets you unlimited tasters, plus live music on the Bar Pink Stage -- all afternoon!
Food will be available for an additional cost.
Must be 21 or older to attend this event. 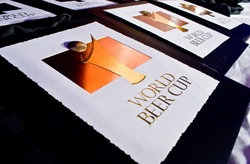 May 1-2, 2012
WorldBeerCup.org
Every two years a highly qualified professional panel of beer judges honors the top three beers in 90 beer style categories with gold, silver and bronze awards. The World Beer Cup is often referred to as "the Olympics of Beer Competitions" because it is one of the very few international beer competitions awarding only one gold, silver and bronze in each category.


“Brewers all over the world participate in order to win recognition for their creativity and brewing ability,” said Charlie Papazian, President of the Brewers Association, the US-based trade association that has put on the competition every two years since 1996. “For a brewer, a World Beer Cup gold award allows them to say that their winning beer represents the best of that beer style in the world.”

For more information and a current list of events visit SDBW.org, twitter.com/sdbeerweek or facebook.com/san.diego.beer.week. Cheers.
Check out a quick video on the 2011 San Diego Brewer's Guild Festival
Powered by