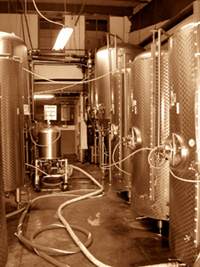 With over 30 handcraft breweries operating throughout San Diego, it’s safe to say our city's local beer consumption is alive and well. Supporting local breweries is great for a lot of things: buying local beer keeps money circulating in our community, it promotes interest in the local brewing scene and participating bars, restaurants, and suppliers, and most local beers are cheaper than domestic or foreign imports, they'll most likely be fresher, and they can expose you to the magnificent world of beer that's being brewed in your own backyard.

Forget the watery, Super Bowl-promoting varieties, and discover the mouth-watering local beers offered by the top ten San Diego breweries. From the local chapter of the legendary Karl Strauss Brewing Company, to the hip La Jolla Brew House, to the acclaimed Ballast Point Brewing Company, these top breweries serve up handcrafted cold ones to quench any palate.

Karl Strauss Brewing company
Karl Strauss is the first brewery that was established in San Diego in 1989. They are famous for the amber pale ale. It's also from where the micro brewery phenomenon started.  Karl Strauss Brewing Company is celebrating 25 years of crafting the local San Diego beer scene and more than two decades later it continues to pioneer with its innovative beers

Stumblefoot Brewing Co.
Stumblefoot has set out to make some of the most interesting styles of beer we can think of. We want our beer to be an artisan experience of local flavor. Stumblefoot Brewery is in its first year of joining the ranks of new breweries. Stumblefoot is a name that personifies the boot strap and prototyping format they have done about creating their brewery. The name pays tribute to their willingness to experiment. http://stumblefoot.com/

Rough Draft Brewery
They like beer. And word on the street is you do too. Best place for beer breaks , dozen of great draft on tap. There’s nothing wrong with that. That’s thinking outside the box right? http://roughdraftbrew.com/

Coronado Brewing Company
Coronado Brewing Company provides handcrafted beers in a family-friendly environment. Their dining area can accommodate luncheon parties of up to 30 people, and offers a large menu, including a kid's menu. Signature brews include the Pt. Loma Porter, Mermaids Red Ale, and their gateway beer, Coronado Golden. Book a facility tour or sign-up for their monthly newsletter which announces special offers that are “brewing.” coronadobrewingcompany.com

Karl Strauss Brewing Company
In 1986, world-renowned brewer Karl Strauss was approached by his cousin Chris in San Diego to start a local microbrewery. Karl was so passionate about the project that he lent his name, face and voice to the enterprise, and until his passing, remained actively involved. Favorites include the Amber Lager, Red Trolley Ale, Woodie Gold and the popular Windansea Wheat Hefeweizen; a rich ale with banana, clove, and vanilla undertones. karlstrauss.com

Acoustic Ales Brewery
In the early 1900's San Diego was home to several thriving breweries, until Congress passed the 18th Amendment (aka Prohibition), which closed them in 1919.
The original brewhouse was built in 1912 and housed the original Mission Brewery.
They are honored to be brewing in such an important space to San Diego's brewing history. It's an experiment.

Rip Current Brewing
At Rip Current Brewing they are going against the flow in the brewing industry by focusing on robust, flavorful beer styles from around the world. While the tidal wave of beers in the marketplace are lightly bready and largely tasteless lagers, they are creating a rip current by brewing beers that go against the tide engaging your palate with rich malty, big hoppy, sweet fruity and even some barrel-aged and sour style beers. Their goal is to give you the broadest variety of styles at their tasting room and let you tell us what you prefer.

Latitude 33 Brewing
Latitude 33 isn’t just the current world headquarters for beer, half a world away, it’s also the place where beer was invented. A quick check of the history books will also show the 33rd parallel played host to some of the world’s most significant events. Great civilizations have risen and fallen (and risen again) upon it. Silk roads and superhighways traverse it. Mythical creatures, ancient gods, biblical figures, sultans, kings, emperors, pirates, and explorers have all called it home. Some even believe the line has mystical significance. http://www.lat33brew.com/

San Diego Brewing Company
The original manufacturing facility known as San Diego Brewing Company opened in 1896. Along with seven signature beers brewed on location, SDBC offers fifty beers on tap every day, and a food menu including House Specials and Sunday Breakfast, where you can order a cold ale to wash down steak and eggs. Top beers here are Hopnotic, Choco-latte, and their best-selling San Diego Amber. sandiegobrewing.com

Mother Earth Brewing
Here on the West Coast, San Diego is considered by many to be THE hot spot for microbrews. It is here, that Mother Earth Brew Co. was born. Founded in 2008 by three passionate brewers, Mother Earth Brew Co. had one goal; to create distinguished, hand crafted beers that stimulate sensory conversation and a desire for the next sip. From a modest garage, to a 2000 plus sq. foot facility, to an additional 6,000 sq. foot Tap House and Homebrew Supply Store, Mother Earth Brew Co. maintains our original goal – to challenge even the most discriminating beer drinker by creating complex, pallet-pleasing beers, and to promote the art and science of craft beer making! http://www.motherearthbrewing.com/

For Email Marketing you can trust
Powered by